Tarot in the movies

Tarot turns up in TV and movies (and even pop songs) a lot more than you might think. But in most cases, it is not portrayed as particularly helpful. In fact, most movie tarot decks seem to consist of only three cards: Death, Tower and Devil. It's not my aim to give a comprehensive look at tarot in film, but just to mention a few that I've seen. (Links to bigger databases listed at end of entry).

Madame Myra sees in a playing card reading that her client, Charlie, will come into a great deal of money and die shortly thereafter. She conveniently leaves out the dying part and tells Charlie in order for this to come true, he'd 'have to get married'. (Whatever could she have in mind??) Even though she finds him repugnant and it becomes clear they loathe each other, married they get.

You know how the cards are never wrong but sometimes the reader is? Some money does turn up, and there's a death all right, but boy did Madame Myra miss the mark.

Night of the Eagle (aka Burn, Witch, Burn) (Independent Artists, 1962)


Successful sociology professor owes it all to his 'conjure wife', as the 1943 novel upon which this film is based is called. Tansy (Janet Blair) is a suburban witch, unbeknownst to hubby Norman (Peter Winguard), a staunch non-believer in superstitious nonsense. When Norman discovers her stash of witchy gear, he makes her burn it all, undoing all the protection spells she's cast in the new town where they've settled. With that protection gone, a series of unfortunate events occurs.

Tarot does not play a huge role in this film, though it is pivotal to the climax of the movie. The deck is used by rival witch and work colleague of Norman, Flora, whose ambitions do not include Norman being made department chair.  In a 'mwa-ha-ha' voice, she announces that she has a set of 'TAH-ROE CAHDS' and proceeds to set them alight, intoning, 'Burn, witch! Burn!' and we all know who she's talkin' about.


The deck used in this film has the plaid backs of the RWS, but mirror image fronts, similar to Tarot Genovese. I assume they are movie prop created for the film. Look at that gleeful gleam in Flora's eye! And tarot decks weren't easy to come by in 1962...

Five strangers on a train end up sitting near Peter Cushing (Doctor Terror) who whips out his tarot cards and offers to read their futures. Each person's reading, as you can well imagine, is scarier than the last, and funnily enough, the last card drawn for each reading is --- dum dum DUM! -- DEATH. There's a twist at the end of the film about the train and its ultimate destination...but I'll leave that for you to watch. If you dare! Mwa ha ha ha haaaa! At least Doctor Terror has the good taste to use a Tarot de Marseilles. 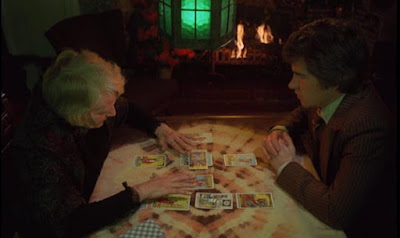 Pete Walker's films are dark and vicious, certainly more so than the jollier Hammer or Amicus horror films. In Cover Up (also known as Frightmare), a key character is a tarot card reader who earns her living telling fortunes in her home. She seems a nice enough old lady, apart from the fact that she is a psychotic murderer and cannibal! (Everyone has their weakness.) The deck featured in the film is a regular blue plaid back Rider Waite Smith. One thing that pleased me about the use of tarot in the film is that a real deck is featured, several cards you never see in movies turn up, and she actually uses some standard LWB meanings in her interpretations, rather than the usual turning over of DEATH with subsequent chasing around the place wielding an axe. (That happens, but oddly after she turns over Knight of Pentacles, yells at the man receiving the reading 'Why are you lying to me!!' and then proceeds to chase him around the house with an axe. More or less).

Visitor from the Grave (episode from Hammer House of Horror TV show, 1980) 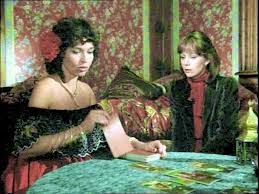 Hammer House of Horror was a TV series from the 1980s featuring thirteen tales of the macabre. In this episode, which is really quite nasty, whilst alone at home Penny is attacked by an intruder. She shoots and kills the man who her husband Harry later identifies as his colleague Charles. They decide to bury the body in the woods -- but Charles doesn't stay in the grave! Penny keeps seeing him everywhere. Penny and Harry end up at a business party where Harry sends Penny off to have a tarot reading while he networks the room. The reader, wearing a flower behind her ear and speaking with an outrageous accent, uses a truly gigantic Visconti-Sforza and a classic Celtic Cross spread...but of course she pulls Tower, Death and Devil! There's something about that tarot reader you find out later. If you dare! Mooo-hooo-hooo ha ha ha haaaa! 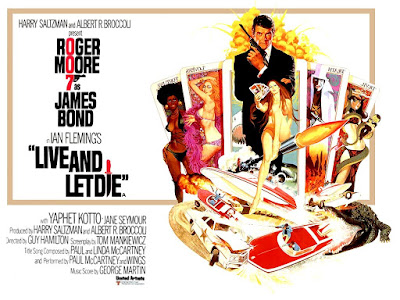 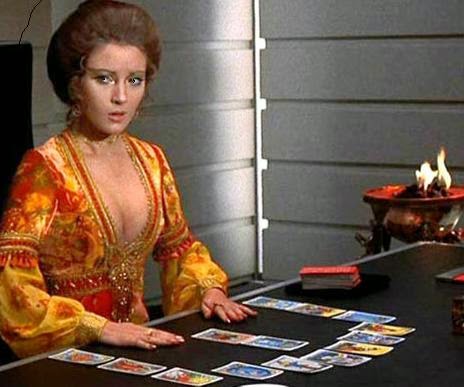 Surely everybody's seen Jane Seymour's first movie role, playing tarot reader and conquest of James Bond, Solitaire, in Live and Let Die. She is reader and adviser to the baddie in the film, Kananga (or 'Mr Big'). In the strange reality of 007, Solitaire will lose her ability to read the tarot when she loses her virginity. (No big secret how Solitaire loses her 'powers' in a James Bond flick. Oh, James!) The deck featured in this film is the notoriously ugly and generally reviled Tarot of the Witches by Fergus Hall. 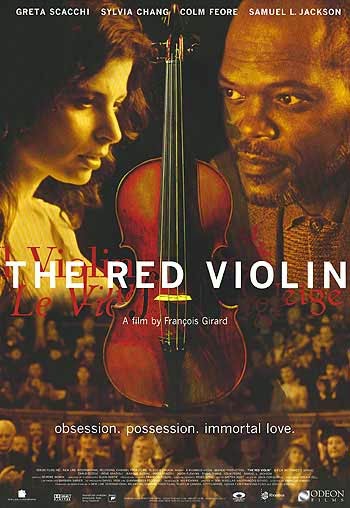 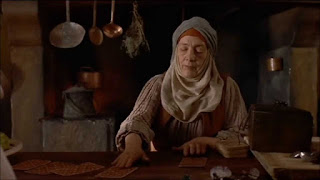 In Renaissance Italy (the birthplace of tarot), a violin maker's wife has a tarot reading from a kindly but strange old woman. The reading makes no sense to either the client or the reader. The violin maker's wife dies, and in grief and despair, he takes some of her blood and strands of her hair and mixes them into a red stain and paints the violin that will be the finest he will ever make. Of course this is powerful magic he has woven into the violin, and we then follow stories of its owners through history, each story fulfilling cards from that strange reading done so many years before. It is a sumptuous film.

The tarot reader is the cook of the household. She is willing to tell the fortune of the lady of the house, reluctantly, and she does this with a simple five card spread, the cards being turned over and read one by one. 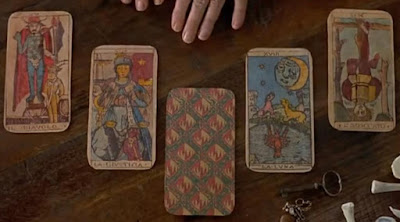 The prop deck used here is lovely and colourful, gorgeously worn and wonky.


It took me a few episodes to warm to this strange joint project between the US and UK...it seemed like a hodge-podge of every movie monster, all stomping around foggy old London town circa 1898. Then we got into the backstory of Vanessa Ives and I was hooked. Eva Green's performance is absolutely amazing -- the most harrowing portrayal of demon possession I have ever seen.

Series 2 continues the excellence; in episode 3 we get the story of the first witch Vanessa ever met, the Cut Wife of Ballantrae Moor (played brilliantly by Patti LuPone, and if she doesn't win some sort of award for it, there is no justice in this world!). In this image, the Cut-Wife (whose name is Joan Clayton) introduces Vanessa to the cards.

Vanessa continues to use this deck in later years -- she is beautiful; unfortunately, the deck is not!

Based on the delightful novel by Susanna Clarke, this TV mini-series proved to be very popular. I enjoyed it very much, and loved the prominent use of tarot.

The manservant of Mr Norrell is the tarot reader in this story, and his cards are featured closely in a scene in which he confronts a street conjurer by telling his fortune with 'the cards of Marseilles', predicting that he will deliver a message to the Knight of Wands. He later encounters the Knight of Wands -- Jonathan Strange!

We learn that this character copied these cards by hand from a borrowed deck. The deck is made up of various types of paper, as if he drew on whatever scraps he could scavenge. A really beautifully done movie prop!

Other lists of tarot in movies and TV:

Tarot Totes Tarot at the Movies and on Television