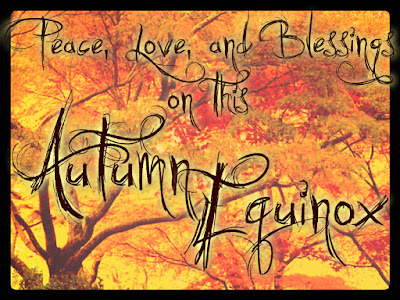 I started this blog seven years ago, and have been pretty faithful to it, with some fallow periods (such as the current one). I did a quick search for previous Autumn Equinox posts and found these:


2012 - for the Tarot Blog Hop (I wonder if that's still running) - Choosing a card to represent 'the hidden god' (I don't own any of those decks anymore - but you may notice I mention disliking the word 'resonate' in this entry, too!)

2014 - look at Sally Morningstar's Wicca Deck (which I still have)

2014 - from the old 'Share a Spread Sunday' series I did for a time (back when I used to do 'spreads')
3 comments:
Labels: Autumn Equinox, Mabon

In this blog entry, I'm just working my way through Dawn R Jackson's example of her playing card layout, The Three Steps. This spread is laid out 1-11 on the bottom row, 12-18 on second row, 19-22 on the third row, and 23 on top. It is read in trios, by counting off in sevens, with the seventh card in sequence serving as the middle card of the trio.

Okay, so counting forward from the first card, the first trio is Jack of Hearts - 3 of Spades - 3 of Diamonds. They follow thus:

When reading the trio, you can seek clarification on it by viewing the card above the middle of the trio.

There doesn't appear to be a question in this reading (something I personally never do - no reading without a question is my policy.) The first trio is Dawn trying to figure out the subject of the reading. She says the seeker is interested in dating someone and getting closer to that person but has not been very successful (6 of Hearts above informed of the love interest). Apparently a date has been broken.

Queen of Spades is interpreted as the love interest - she's got a lot of problems and while she may not be uninterested in the seeker, she's just tired and consumed by the crap going on in her life at the moment.

The third trio is seen as advice - don't give up, the desired deepening emotional bond might be achieved with persistence. 4 of Clubs being a place, combined with 2 of Hearts, a museum or theatre is indicated. Combined with 10 of Diamonds (a lot of money), Dawn decides it's a theatre, and suggests inviting the love interest to a show which is part of package deal included transportation to an out-of-town theatre. (Two 10s in close proximity indicating a journey). An alternate or additional reading of this trio is that the financial deal the seeker is working on is stable and will work out harmoniously.

The second ascent, first trio, sees the seeker heeding the advice to keep plodding away, and he will keep asking her out, and keep getting turned down, though with the occasional acceptance.

8 Hearts - 7 Spades - 6 Spades is interpreted to mean that the seeker's thoughts of love get more and more negative. He is ready to walk away. She's giving too many mixed signals. The mystery behind this is solved, says Jackson, by the Jack of Spades above 7 of Spades.

The primary concern of Queen of Spades is her home and child. She is worried about him because he is feeling depressed and lonely. She believes that he is hiding something (7 of Spades below) and it may be failing grades or other bad thing (10 of Spades). A new relationship (2 of Hearts above Jack of Spades) is not the best idea right now, she thinks. However, this trio is red, showing a light at the end of the tunnel for the seeker. Things will get better.

As the Jack of Spades' outlook begins to improve (a red card above him), the Seeker's emotional situation will grow more fair. The Queen of Spades has become the Queen of Diamonds, and Jack of Spades improves to Jack of Diamonds, showing more sociable and better outlooks. The bodes well for the seeker's happiness (10 of Hearts). An alternate or additional reading of this trio is that the seeker will be invited to the wedding of a younger couple.

With his relationship in hand, the seeker is next confronted with lack of stability in a new financial venture which will become of great concern. There will be a lot of delay and worry and possibly a lawsuit. Travel plans (two 10s) should be carefully made. A secondary reading is mentioned from Ace Diamonds -10 Spades  -- a destructive fire! It's not a house fire (Ace of Hearts is not over the Ace of Diamonds), but still. That's a heck of a thing to report!

The 'surprise' is a fair one - his wish is granted and he enters a harmonious relationship and is married.

This was a lot to take in, which is why I decided to talk my way through Dawn's interpretations first. It's an interesting story she weaves.

The devil his due

Funny I should draw this card this morning, as I was just reading about it in Tarot Triumphs by Cherry Gilchrist before I logged on.

You may notice the TdM Diable is not particularly 'Satanic', as you'd see in some later decks, such as Morgan Greer or even Rider Waite Smith. Neither is he the 'misrepresented Pan' figure of natural carnality seen in decks such as Druidcraft or Tarot of the Hidden Realm. Here, Diable is a 'squat, hairy creature' based on 'a stock type devil originating with the Persians or Egyptians and reach us via Byzantine art', according to Gilchrist.  She says the traditional TdM Devil is a 'stupid, comic type devil,' because mocking him reduces his power, and this technique was widely used by medieval monks in their illuminations.

Gilchrist gives what I consider a contemporary interpretation of the Devil. In some instances, we spend so much time giving the devil his due, we forget he's actually not a very nice guy at all. Gilchrist does not fall into this trap. 'People or situations that are diminishing our capacity to act, think, or feel...to have a chance of becoming free, we must first recognise that we are enslaved...a situation of very limited choice.'  She says nothing about carnal appetites being neither good nor evil and how misunderstood the Horned One has been. Thankfully.

I wonder what the Devil card signified to 15th century folk who saw it either in a tarocchi game or in divination. I wonder what it meant to readers down the centuries, before Golden Dawn and other 'esoteric' schools latched on to Tarot.

But these are just idle thoughts, because our minds are not the minds of 15th century folk, and it would be silly to think that Tarot interpretations that meant something to them would mean anything to us. Our life experience and the way we find meaning in it are really entirely different. (Notice I didn't use the word 'resonate'. Shudder.)

So I guess today I need to be aware that there may be unpleasant choices to be made, and there will invariably come a time to pay the piper.
2 comments:

Times they are a-changing

I've got my collection down to 30 tarot decks and 29 oracles. This is down from a peak collection of around 200 decks total. There are still several decks I could get rid of that I never use.

Most of the money raised from the deck collection have gone into the board game collection, which has gone from 0 in February to 37 (45 if you include expansions to base games). We're very much enjoying our new hobby. It's nice to have something we can do together. 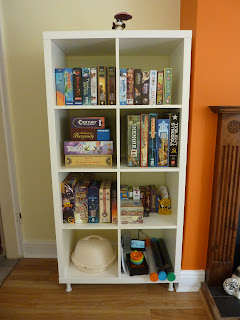 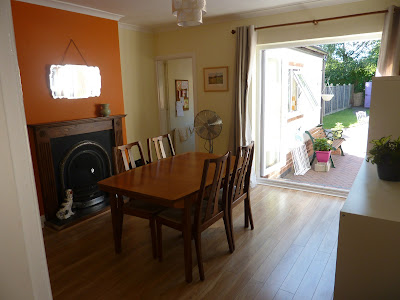 The dining room is nearly done. Here you see the new colours of yellow and orange, and I've added a new second-hand dining set and some white Ikea shelving units. 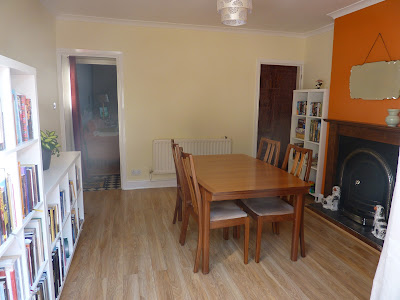 Those doors that I was going to paint green you'll see are now both gone, and I've hung a groovy bamboo curtain over the cupboard door so I could place a shelf unit in that corner. 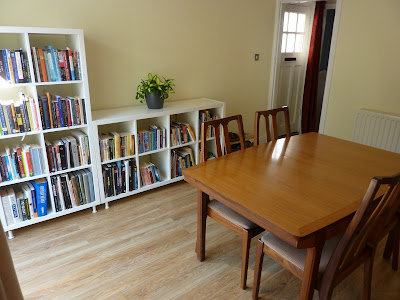 I bought some little feet to go on the shelves to give them more of a finished look, and also so they can be adjusted to make up for wonky flooring (80 year old house). 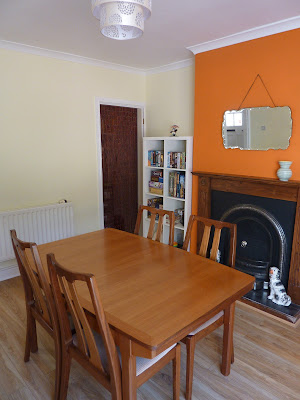 You'll also note the 1930s mirror and the Staffordshire dogs I got for my birthday!

There's a bit more decorating to do in there, but that's pretty much it. :)