Elemental correspondences -- have you thought about yours? 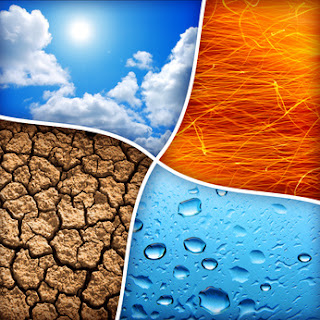 I've just been reading The Oracle Travels Light by Camelia Elias, again. The first time I tried to read it, it just didn't click for me. I couldn't follow. It was a bunch of gobbledygook. And this after I was so utterly smitten by Marseille Tarot: Towards the Art of Reading. I admit, I was trying to charge through with a pen in hand, looking for the 'good stuff' to incorporate, and not really reading it the way it was meant to be read. Several months later, it seems to be falling into place. And today, I felt a real paradigm shift with regard to elemental correspondences -- the elements we assign to the tarot suits. I initially rejected this when I read it in Marseille Tarot, and even wrote in the margin of that book: 'These are off base -- but as long as she is consistent, I guess it doesn't matter.'

I learned on the Golden Dawn system, which is used in the Rider Waite Smith and most tarot decks. Nearly all readers in the English-speaking tarot world use this system:

If you want a book that will tell you everything you ever wanted to know about applying this particular system to tarot, then Benebell Wen's Holistic Tarot is the book for you. I read that one cover to cover and thought my life was complete, until I got hold of Marseille Tarot directly after reading it!

Now I'm not an expert on various systems and don't know the origins, but I do know that some decks switch Air and Fire, having Swords = Fire and Wands = Air. Decks such as Silicon Dawn and Legend Arthurian do this.

The Crystal Tarots by Elisabetta Trevisan switches Cups and Swords so that Cups = Air and Swords = Water, which is really hard to fathom.

Let it be known that you don't have to use elemental correspondences in tarot readings. It's not necessary in the slightest. And you don't have to use a widely accepted system, or follow the system of the deck you're using -- though it may be a challenge to deviate, as some decks make the elemental correspondences very plain in the art work and colouring. But if you do use correspondences, you ought to have a good reason behind your choices, beyond, 'It's the one everyone uses,' or 'I just like them like that.'

In Marseille Tarot, Elias gives her set, saying, 'This is my own rendition, and based on my understanding of how the card readers of old, the cunning-folk, must have thought of it when they passed down the essential idea':

What? My brain could not compute how Coins could be anything but Earth, or how Swords could be anything but Air. She wasn't even switching Wands with Swords, which at least I'd seen before in other decks. No, she's switching Wands with Coins and Coins with Swords!  I dismissed this as some personal quirkery and moved on, because her explanations were too impressionistic and I could not follow them:

'Coins/Diamonds are for spring and fire. A fresh idea is a hot idea. Coins are chiseled for exchange and culture. We hold coins in our hands. They denote working with our head. Coins represent the nervous system. All things on fire. Travel vehicles that use an engine. Expensive computers. A cooking range. The kitchen. The dining room. The roof of the house. East.' (Marseille Tarot, page 123)

What what?? Coins, fire engines, computers, what the hell?

'Batons/Clubs are for autumn and air. An idea needs to be harvested. Trees grow in the air. Tall trees turned into batons to fight with are at arm's length. We exercise with a stick. Make fences. Clubs represent the muscular system. We run. We use our legs, or take an airplane to whiz through the air faster. West. The floors of the house.'

Okay, I thought -- whatever! This must be really over my head or else this lady's just got some very kooky ideas, but it doesn't matter, because the rest of the book is so useful. Those are some crazy words and phrases hooked together there. I made question marks in the margin and turned the page.

Then, this morning, I was up at an even more ungodly hour than usual (4.00 AM -- sciatica), and encountered these notions again in the book The Oracle Travels Light. This time, it seemed to click. Reluctantly, I might add, because I do not like writers meddling in the affairs of my fixed ideas, for I am subtle and quick to anger. :) But click it did:

'What are the four suits in a pack of cards? Nature, our own bodies, and prompters of action,' I read. Hmm. Tell me more...

'The cups suggest our blood, and the way it circulates in our bodies. Without our blood streaming we are dead.' Yes, true. Cups are essential. Liquid is life. Yes, yes.

'With the diamonds or the coins, we make transactions. We can feel our adrenaline making our blood hot when we're about to close a deal that's important to us. Having your brain on fire is no small thing.' Pause. Squint. Coins as fire? NO. That's not right. I pictured all those tarot cards showing coins nestled in earth or growing on trees. And yet...my own feelings about money aren't cold like the earth, or in any way about growth cycles. My feelings about money are fevered. I have to admit it. I carried on reading...

'With the clubs or the batons, we build dwellings, or compete.' I pictured wattle and daub construction, and cavemen hitting each other with sticks. 'They have the energy of the wind. Before they are cut down, tall trees know who whispers in their leaves.' By god, I suddenly saw treetops swaying in the breeze and heard the noise and thought holy crap! Trees are wind! That's how they talk! What else is here?...

'With spades or swords, we dig the earth. We go to war to conquer territory, more land - more earth.' Great gods, I see this. Spades ARE used to dig the earth, and swords ARE forged to conquer, and to conquer what? More land! Holy paradigm shift, it hurts to have your gears switched. But I could actually see how swords could be EARTH.

So here I am. Changed again. I've already given up esoteric blah-blah when thinking about the suits. Taking the example of Enrique Enriquez, I've started looking quite literally at cups, batons, swords and coins in my readings. And it feels to me as if these correspondences are also more literal and mundane, more suited to the actual emblems themselves. I could never really see how batons were fire, but I can relate to trees swaying in the wind; it is an image that is much more deeply meaningful to me than imagining sticks burning. And I can relate to the fire in the brain caused by coins. Yes. And digging the earth with spades and battling for land with swords makes far more sense than the vague image of a sword slicing through the air. So yes.

Will this last? I'll just have to try a few readings and see. And with the TdM, no artist has imposed any elemental ideas onto the cards for me to fight against. I can use whatever I want, or not use any. Beauty.