Deck Review: Sherlock Holmes Tarot -- The game is on! 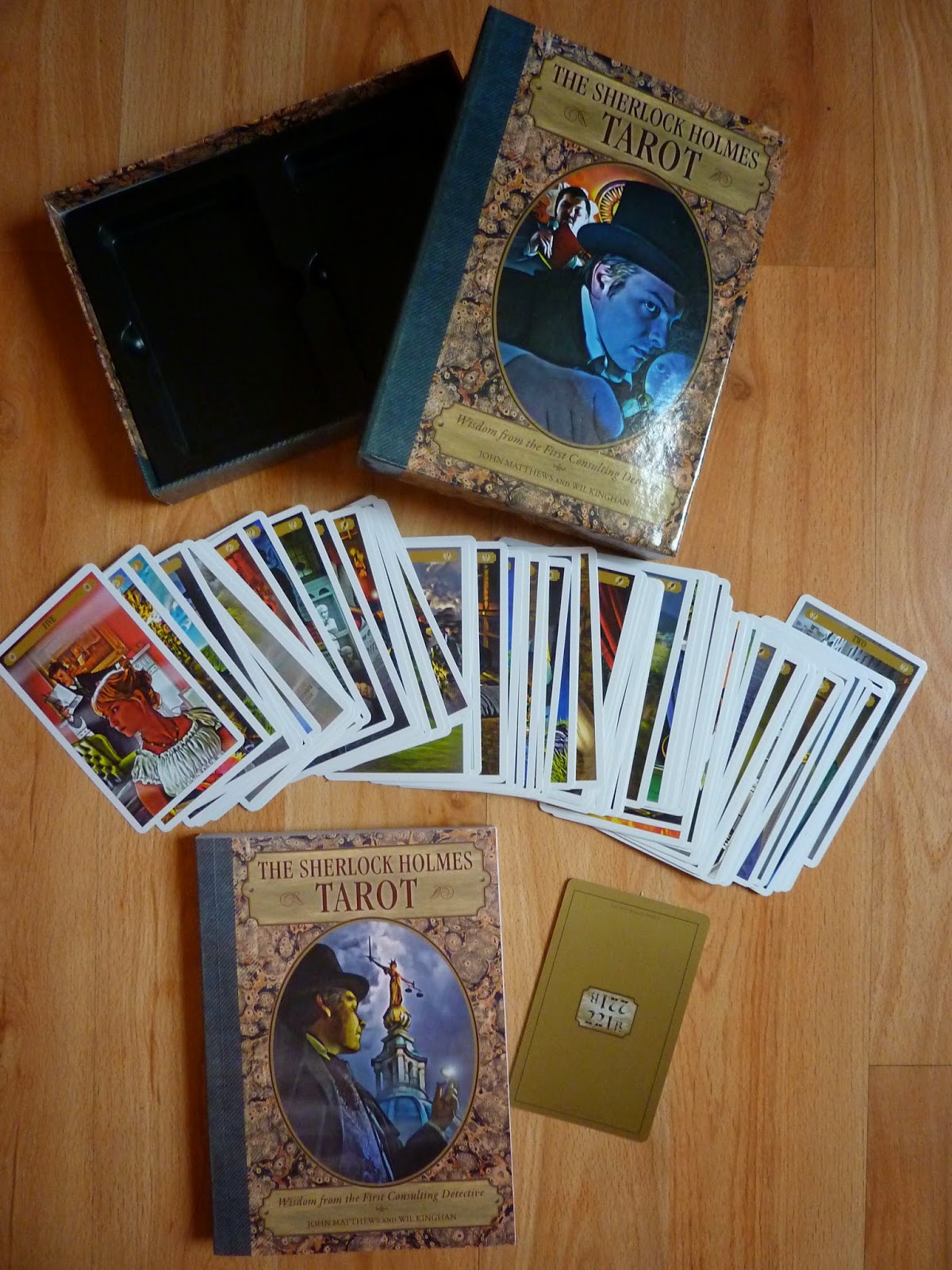 It was probably because  I was in the throes of fandom for the TV show 'Sherlock' when I saw this deck announced that I instantly pre-ordered it. That was in early March, I think. (The Matthews have an uncanny knack for quickly producing decks that capitalise on current trends. More power to them! One has to make a living, after all.) I received this deck just over a week ago and as you know I have blogged with it all week. I've read the book cover to cover. I've handled the cards daily, and I've tried out the spreads in the back. I like this deck very much. It is a charming cross-collectible and a very fun thing to have. I'm glad I acted on that impulse and clicked buy.

What's included
Connections Publishing has done an excellent job with the packaging on this deck. It comes in a very sturdy and handsome box that looks a bit like an old book having a cloth spine and marbled end papers. The pattern is repeated on the softcover companion book. I like the Victorianesque feel of the title design, being like a book plate above and below the oval-shaped featured image. The box features the Sun card (called 'Magnifying Lense') and the book cover features the Justice card (called 'Courts of Justice').

The sturdy, compact box houses one of those plastic inserts in which the deck nestles, divided into two halves. The cards will certainly not budge in the box; they will not slide around and will sustain no damage when inside the box (which is not something that can be said of the miserable Llewellyn packaging!)

In addition to the nice box and the deck of 79 cards (there's an extra one called 'The Giant Rat of Sumatra' -- I guess it's the Holmes version of the Happy Squirrel. Meh.), there is a softcover companion book of 168 pages written by John Matthews and Wil Kingham.

Overall, it is a lovely kit of good quality that will stand up to wear and use.

The cards
The cards measure 11.5 x 7.5 cm, a lovely size, not too long and skinny and not too square. I think they're the perfect size. The card backs are plain gold, decorated with a kind of number plate reading 221B, and are fully reversible.

The card stock is relatively thick and slightly stiff, having only a very light lamination. It will riffle shuffle with some effort, but does not riffle and bridge as beautifully as, say, the Morgan Greer or other more flexible US Games or AG Muller decks. The cards are very smooth on the front and slightly rougher on the back, and are pleasant to the touch. (Some cards are not, such as the extra thick, plasticky Tarot of the Sidhe.)

The artwork is quite beautiful, with oversaturated colours which capture the somewhat lurid quality of foggy, lamplit Victorian London. I like it very much.

The majors
The tarot structure is maintained in this deck, but each major card has been renamed, though they retain the same order and are numbered.

I found all these choices delightful and they made perfect sense to me. I particular like Wheel of Fortune as Bradshaw's Directory, and the World as London Times. :D

The minors
Here's where some people may be turned off. The minor cards do not have pips at all. Each card is a scene from a Holmes story. The image often doesn't make you think of the traditional card meaning - fortunately when you read the story reference in the companion book, most of them click, but some are a bit dodgy. Still, you can't hit it out of the ball park on every single card, especially when you're doing a themed novelty deck like this one. This deck is under no illusions about itself. It is a novelty deck, a fun linking of tarot to Sherlock Holmes stories, nothing more.

On top of this, the names of the suits have been changed:

Possibly knowing this might annoy, and realising those are really long words, instead of printing them on the cards, the design incorporates icons (see above). At the top of each card, there is the gold number plate design with the number of the card spelled out, and the icons on either side.

The courts
Courts have been changed to fit into the Holmes world:

These retain the meanings of the traditional court cards, but the images don't shout them. You just sort of have to know the meanings.

The book
The 168-page companion book is a lot of fun to read. It is the usual soft cover book with stitched binding and I have successfully trained it to lie flat. (This is very important to me in a tarot companion book. I hate a book that you have to hold open, that keeps flopping shut. It's hard to handle cards and wrestle a book at the same time.)

Each page of the introductory material  and the spread information in the back has a rather elaborate border repeating the number plate shape. The background of the pages has a slight marbled pattern. For some reason, the text is printed in a brown colour rather than black, perhaps to give it a faded look. Each major card gets two pages of explanation, while the minors get one page each. An illustration of the card is included for each, not in colour, and not taking up too much page space. (I've never understood why some companion books waste so much page space on giant colour images of the cards, often nicer than the cards themselves.)  For each card, the context from the Holmes story is explained, some key meanings given, and quotation from a Holmes story, which may or may not be quickly apparent as to its relevance. (Trust me, this deck and its companion book make FAR more sense than Arthurian Tarot in this regard!)

The verdict
I have enjoyed playing around with this deck, and it has inspired me to order The Annotated Sherlock Holmes, edited by William Baring-Gould, which contains all Sherlock Holmes stories and novels by Arthur Conan Doyle, with exhaustive annotations by Baring-Gould explaining interesting tidbits about Victorian London and the Holmesian universe. I can't wait to get it!

My verdict is, if you are a fan of Sherlock Holmes and like novelty themed decks, this is a nice one for your collection. If it annoys you when card meanings are not instantly apparent, echoing RWS imagery, you will be disappointed.