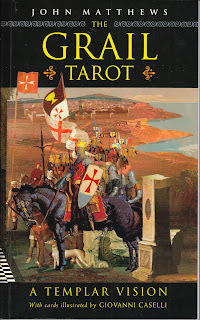 I don't sleep in on the weekends or days off, and usually I say it's because I just can't sleep more than about 6 hours a night. There's another reason, though, and that's because if I'm anywhere close to consciousness, my mind starts to race until I can't bear it and have to get up. Something haunts me, it's the kind of thing you come to terms with, but that sticks in there. (Most of us have a 'thing' in our lives.) When I have all my faculties, I am able to remind myself I am here in this moment and all is well. But in my vulnerable sleep state, I am at the mercy of the demons of the depths, and they are evil little bastards who will not let me rest. I woke up this morning from doing battle with them in that semi-conscious state between about 4.30 and 6.00 AM, when I'm telling myself no normal person would consider getting up on a Sunday morning, and I should at least try to stay in bed until 7.00. But thoughts and images drove me from under the warm duvet and into the cold morning. Now I'm here with a cup of black coffee and John Matthews' Grail Tarot: A Templar Vision, because a morning like this is no time for bubble-gum fairies.


The Grail Tarot is a beautiful deck in its concept and breadth, but not one I reach for often because it is, to put it mildly, epic in scope and quite melodramatic. The whole Grail legend is full of pain, confusion, and futility, with the frailest glimmer of hope (but if realized, what a radiant and effulgent hope it is!) It is a jumbled and confusing story, in which knights wander, floundering, in search of the unattainable. We can all relate, I think, because I believe we all feel a deep yearning after something, and have little idea what it is or how to find it.

In Chretien de Troyes' Perceval: Story of the Grail, Perceval fails to attain the Grail when he refrains from asking questions about it. (Chretien never finished this poem, and so the mystery has fired the imaginations of generations.) Perceval, a simple youth raised away from the world of men, has undertaken to find a mysterious object called 'the graal', and finds himself invited into the very odd castle of the Fisher King, where in the hall, a strange procession marches past him: a young man carrying a bleeding lance, two boys carrying a candelabra, and a beautiful girl carrying a highly decorated 'graal', a flat serving dish. Having been upbraided by other knights for asking too many questions, Perceval keeps silent about these strange sights. The next morning, he is told by a 'loathely lady' that if he had only asked the right questions, the Fisher King would have been healed. He should have asked why the lance bleeds, and whom the grail serves. Chretien's poem ends here, unfinished.

What a strange story! The images are visceral, Perceval's 'failure' seems brutally unfair. But we have the Grail questions: Why does the lance bleed? Whom does the grail serve? In other words, what the heck is going on and what does it all mean??? Isn't that what we all want to know when life presents us with its parade of incomprehensible weirdness?

The lance that bleeds, to me, is the wound that doesn't heal. So what is my wound that doesn't heal? The card depicts a knight (in the background) witnessing the assault of a fellow knight by a warrior in black armour (the bad guy). He must choose between his kinsman or his quest. It seems to me an emotive representation about how I feel (and have felt) about the choice I made.


What is the grail? Three of Swords﻿
I shuffled this deck thoroughly between questions rather than drawing from the top of the deck after one shuffle, and I still got 2 of Swords and 3 of Swords in succession. The 3 of Swords is the consequences of what happened in the 2 of Swords card -- the kinsman who was left behind catches up to the knight on the road and punishes him brutally. Is my grail 'punishment'? It would seem that my quest in life has been to find fault with everything I have ever done or thought and punish myself for them endlessly. How many times do I have to brutalise myself and leave myself bleeding on the road side before it will be enough for me?


What can heal my wound that doesn't heal? The Gnostic Christ 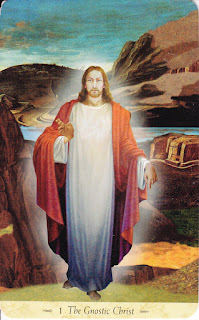 When I picked up the deck to shuffle for this answer, I had the distinct impression that I would draw this card. When I turned it over, I felt a rush of warmth descend from the crown of my head and down the length of my body. The Gnostic Christ in the Grail Tarot is major arcanum 1, The Magician. Notice his hands are in the 'as above, so below' gesture. In the gnostic sense, this card is about finding the kingdom within, the divine light of the All which is beyond words. This is the Christ within, and has nothing to do with the Jesus of mainstream Christianity, in which the Gnostic Christ is considered a heresy. The healing is within me; it really is.